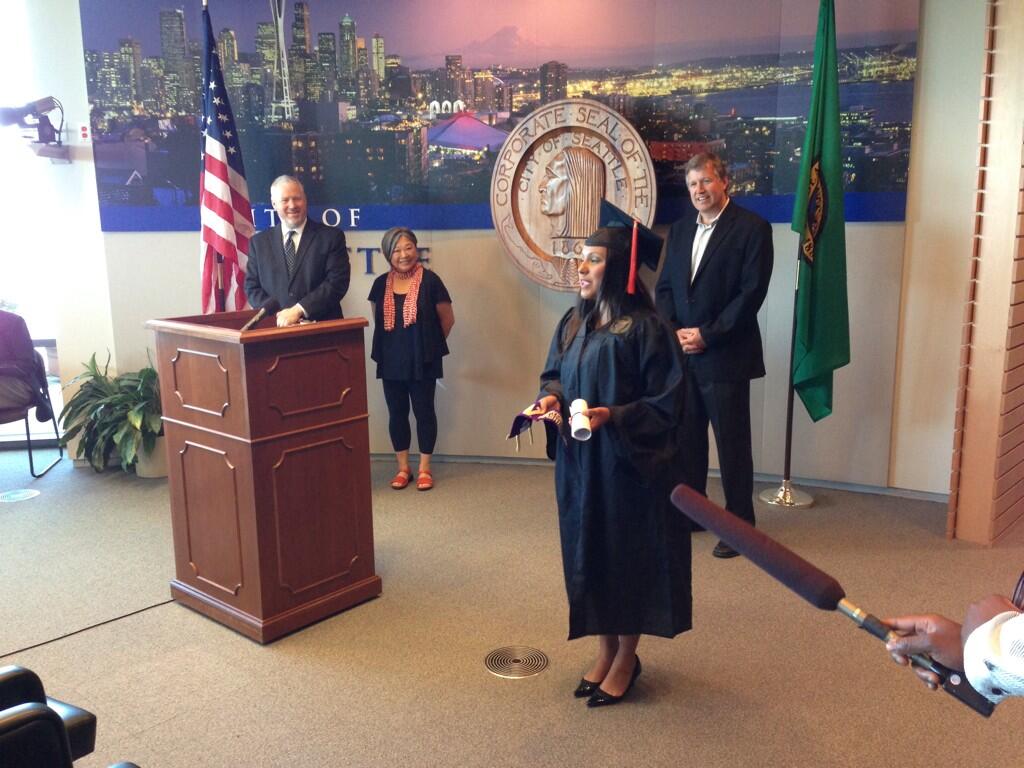 Tania Santiago, Miss Hispanic Seafair and a University of Washington student, speaks on immigration reform during Mayor Mike Mcginn’s news conference: “America is where I’m meant to be.”

Today, Mayor McGinn announced new City efforts to support young people eligible for work authorizations through the federal Deferred Action for Childhood Arrival (DACA) policy launched by President Barack Obama in June 2012. Individuals age 18 and over can now call the Seattle City Light Service Center at (206) 684-3000 and have their names added to the utility bill for their home, helping to provide a paper trail to prove residency.

“These small changes in the way the City operates can have a big impact on the lives of these young people,” said McGinn. “We have an opportunity here to support immigration reform at the local level. We hope other cities will follow our lead in supporting youth who are eligible for DACA.”

DACA offers a two year grant of reprieve from deportation as well as work authorization for unauthorized immigrants who were under the age of 31 as of June 15, 2012 and entered the United States under the age of 16. This includes many of those who would have been eligible for legal residency under the proposed DREAM Act.

Many DACA-eligible people have reported that one of their greatest challenges is to prove that they have been continuously residing in the United States since their arrival in childhood, after years spent hiding the fact of their residency. The City of Seattle will help DACA-eligible people prove their residency by permitting them to show utility bills with their name listed. Washington State has over 40,000 residents eligible for a work authorization under DACA, many of them currently residing in Seattle.

Jorge Carrasco, General Manager and CEO of Seattle City Light said ”Utility bills have historically been used to document residency for many different purposes, and Seattle City Light can use an already established process to help people living in Seattle take advantage of DACA.”

Seattle Channel will also be running Public Service Announcements to warn DACA-eligible youth about scammers who promise to help with immigration paperwork for a fee, but don’t deliver the services.

John Giamberso, General Manager of the Seattle Channel, said “the Seattle Channel welcomes the opportunity to be a partner in engaging and empowering new residents by providing timely information to all of Seattle’s diverse communities on our cable channels (21, HD 321 Comcast, HD 721 Wave) and on our website, seattlechannel.org.”